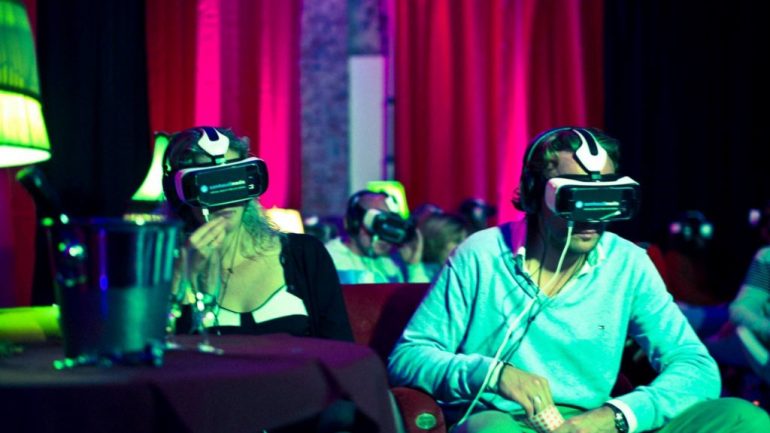 VR Workshop (Free)
Sat, Oct 26th 2:00 PM in the Living Room
Join us for free hands-on training in essential skills for producing virtual reality 360 video. Learn the fundamentals of immersive content and what type of content is best for 360 viewing. Hosted by Dylan Roberts with Freelance Society.

In this workshop you will:
•Learn the fundamentals of immersive content and what type of
content is best for 360 viewing.
•Understand the different tools and software available to you to
begin producing VR content.
•Work hands-on with a range of VR cameras and learn the
technical elements behind successful VR (frame rates, camera
movement, avoiding motion sickness).
•Learn to shoot VR video and stitch it together using Adobe
Premiere & After Effects, Mettle Skybox Plugin, Kolor Autopano
Video Pro & Giga, and YouTube Metadata Injector to create the
first VR project.

ABOUT
Freelance Society is a content studio and virtual reality company created to source, gather, package and deliver immersive content that reaches the world. FS exists to identify, gather, immerse and conjure emotion through the power of VR. Propelling the medium forward through empathy and excellence, we are committed to utilizing the very best in new technology to educate ourselves and each other about the world we live in. www.freelancesociety.co Dylan Roberts is from Austin Texas and first learned film making at Austin Film Society. He graduated from the University of Arkansas (Fayetteville) in 2012, having majored in broadcast journalism. At the age of 18, Dylan began traveling internationally as a journalist, filmmaker and VR producer. Through media, Dylan has been able to travel all over the world to countries including Iraq, Lebanon, Cuba, Uganda, Gaza, Somalia and more, creating content for VICE Media, The Economist, Vocativ, New York Times, Ryot, Seeker and more. Dylan is also part of Google’s VR Journalism Group and hosts the first VR Program for Tulsa Overground. Dylan was Co-Producer for the Sun Ladies VR film which was selected by Sundance Film Festival and SXSW in 2018. FS – Co Founder & CEO